I have been a member and used their letter writing service extensively for a number of years. I was a newcomer and did not know any better. It took time and I had to learn the hard way. Much time and dollars spent and I have had absolutely zero results. I have been on one of their Romance tours many years back, although have to admit, that I did have a nice time. It was my very first trip to the Ukraine and I was excited to see a new country.

I went to a few socials with Anastasia and met a girl there at the first party. She was a nice lady but she did not have sincere intentions to have a relationship with an American man. All that she wanted was to be wooed, wined, dined and receive nice gifts from an American guy. I was totally smitten at the time and I thought that things would have worked out. I was wrong! 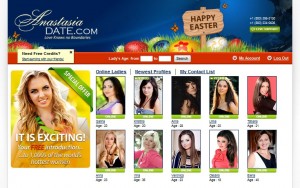 I hired an Immigration Attorney to work on a K1 fiancée visa. When time came for this woman to go to her interview at the Embassy, she did not go! she backed out. How do you think that I felt about this entire ordeal? All in All she told me that her mother did not want her to move abroad because that she was her only child.  She could have told me this early on. Is this not a Scam? I was out of a lot of money besides my emotions being hurt. Soon afterwards I broke things off with her. Much time, effort and money being wasted.

A few years later, met another lady she lived in Odessa, was 35 at the time and divorced. We exchanged letters with each other weekly for about 3 months. I still believe that all letters were not written from her but from Anastasia’s interpreters. She would not directly answer questions that I posed at her. She wanted to chat, so that she could supplement her income.

I told her that I would be traveling to Odessa and that we can meet. She seemed to like the idea. When I arrived to Odessa I sent her a note through chat and she acted very surprised that I was in Odessa. Hmmm, very strange! About a day later she wrote me back and said that she could not meet with me because she had to take care of her sick Aunt.

This is one of the oldest excuses in the book! We have all heard this one many times. I spent a few weeks in Odessa and she made no attempts to contact me. The moment I got home, there she was on chat again wanting to chat. I said no way!  So this is the 2nd Scam… I could go on and on and on. I have done a lot of reading from other members and I am well convinced that Anastasia is a big rip-off Scam just to play with your heart and empty out your wallet.

Please stay away from this company!  This is the biggest fraud going on the internet!  This company earns 150,000,000 a year for no reason! They are just in business to make money. This company have helped start up International Foreign Dating back in 1993 but this is the very same company that has thrashed this entire Industry.

Never Send Money to anyone that you have never met.

No matter how believable their sob story may sound.

Keep your money in your Wallet!