CharmingDate.com Review by a real user

I reckon Charmingdate is probably a scam. I’ve just spent a couple of weeks on there and about 700 quid. It’s actually been quite enjoyable partly because the pictures on there are very pleasant to look at (whether they are actually pictures of ladies you are ever likely to meet is another matter) and partly because it was quite good fun trying to figure out if it was a scam or not.

As noted in previous comments here you can’t exchange any contact details with the girls because the computer software will bleep anything out that looks like a phone number or email address. I figured out a way to get my details to the 4 ladies I had been talking to after about a week of conversation with them during which time they had become so friendly with me that I could almost hear marriage bells with all four of them. I was a bit suspicious of this anyway because I‘ve never found that I was hugely attractive to women before so being treated as if I were Brad Pitt by 4 at once came as something of a surprise.

A few other things had started to make me suspicious as well so I decided to do some tests. I found out that I could put a classified advertisements in a paper called the Kiev Post online for about £30 so I decided to put one in with my name, phone and email in and then tell the girls to buy the paper and look for the advertisement in the personal section (perhaps not to be recommended as I may well get strange messages from some dodgy Ukrainians for the rest of my life but I suppose it might help to pass the odd long winter evening).

Anyway this was when my problems with the ladies started. The instructions to buy a paper and read the personal ads until you see my name and details are fairly simple, I would have thought most 5 year olds could do it , and the computer was not blocking any of my messages but all 4 ladies started doing the same thing in exactly the same way ,namely pretending not to understand what I was talking about .

Of course it could be that they were worried about the dating website getting wind of it or it could be that they are just worried about such personal contact with me but I did advise them to withhold their numbers until they felt happy about it. I also said that I wasn’t expecting them to contact me unless they wanted to but I had no joy in even convincing them to buy the paper. I suppose that they may have bought one when they were sure no one would know but so far at least none of them have tried to contact me. 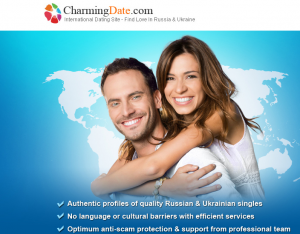 Anyway on to yet another experiment. I seemed to have upset these 4 women so being a kind and considerate person I decided to pick someone else for my next test. I had noticed during chatting to various ladies that there was the option with some of them of a video link which I assumed might be live so I thought I would test this out. I asked the woman with whom I engaged in chat whether the video was live and she said yes it was so I asked her to wave her right arm . It appeared that I had upset another woman since not only did she not wave but the chat ended rather quickly so I concluded from this that I was either just getting good at upsetting women or perhaps the video wasn’t live.

You would expect there to be a substantial increase at around this time I think but Charming date didn’t increase notably until a bit later. This has led me to conclude that either all at Charmingdate get up very late or perhaps they are not communicating with me from Ukraine at all but somewhere much closer in time to the UK.

I have also noticed that whilst on the genuine dating site I have received around 30 emails from women and no invitations to chat. This is over about a 4 day period and would be logical because a woman would be more likely to want the first contact to be the slightly less intimate email rather than a chat , I would have thought.

On Charmingdate on the other hand I was virtually swamped with chat requests (some very suggestive in nature ) from the moment I started on the site. I measured it and I was getting roughly 6 requests per minute at peak times , which is the equivalent of thousands per day, which when compared with the 7 or 8 a day of the genuine site , is just not believable.
I think most if not all of the women are professional chatters employed by the company to get you talking and therefore spending money. That’s all it is , not a dating agency , but a clever money making fraud.