How Ukrainian ladies saved the Samaritans of Mount Gerizim

The Internet revolutionizes almost everything it touches including the dating and marriage habits of modern life. One of the most striking examples of this concerns an ancient religious sect, the Samaritans of Mount Gerizim, and five women from the Ukraine. The Ukrainian women have helped to save the Samaritan community from the real possibility of extinction.

Mount Gerizim is located in the West Bank in Israel. The Samaritans, whose origins date back 2,700 years, share much in common with their Jewish neighbors but, there are essential differences as well. Most people are familiar with the “Parable of the Good Samaritan” told by Jesus in the New Testament. Jesus used the parable illustrate that the Samaritan, looked down upon by the Jewish community of the day, acted more compassionately and morally than his Jewish neighbors. The Samaritan comes to the aid of an injured stranger while the Jewish individuals in the parable simply pass him by. 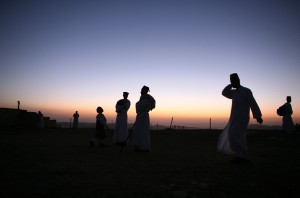 The Samaritan community has remained located in the West Bank for almost three centuries practicing a strictly ascetic and demanding lifestyle that seems out of step with the modern world. This makes it even more surprising that five young women from the Ukraine abandon the modern world that they knew to marry and join the Samaritan community of Mount Gerizim. The women exchanged an urban and modern environment for a more austere and isolated one. The women also had to convert from Christianity to the Samaritan faith.

During the Roman era the Samaritans numbered around a million. Their numbers had dwindled to 147 by 1917. One factor in their decline was persecution by their Islamic neighbors. The strict rules the Samaritans lived by, however, played an essential role in their decline as well. The Samaritans did not welcome new members into the sect through conversion and they forbid members to marry anyone outside of the community.

As the population decreased the marriage between first cousins and other blood relatives increased. The result was the serious health problems that accompany inbreeding. The Samaritans of Mount Gerizim are believed to be one of the most inbred communities in the world. 46 % marrying first cousins and 80% marrying blood relatives. It was a common practice for the Samaritans to have large extended families of 8 to 10 children to compensate for their declining population. Health and genetic problems grew as the population grew. Blood diseases, Usher syndrome, deafness, muteness, blindness, and physical handicaps threatened the very survival of the Samaritan community. 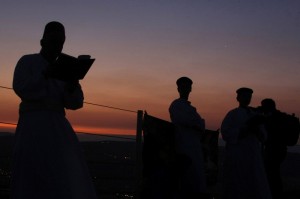 The fortunes and future of the Samaritans have changed and this is due to two reasons; access to medical science, including genetic testing, and removing the prohibition on outside marriage. Marriage to women from outside of the community has literally reinvigorated the community. Twenty five of the women are Jewish but five women are from the Ukraine. Given the small size of the Samaritan community, the five Ukrainian women are playing a invaluable role in revitalizing the community’s hopes for the future. Aharon Ben-Av Chisda, a high priest in the Samaritan community, said. “now we have hope.” He half jokingly says that the goal is to reach 10,000 in the next ten years.”