This is a charming film in which an international marriage broker unites American men with Russian women. The men pay for the women to come to America, with the object of matrimony. They get to know each other, and discover whether marriage is in the future for them.

James Richards is one of those men. He has traveled to Russia to find a bride. He is tremendously impressed with the Russian women he sees, who far surpass, he believes, American women in looks. He is introduced to Uliana, who finds him good looking with a good sense of humor and a great big heart. She is 32 years old and is attracted to James. Uliana’s mother worries, quite rightly it turns out, that she might lose her daughter to an American. Uliana’s boss thinks there must be a lack of beautiful women in America, since he has already lost an office worker to an American.

James thinks it is pretty cool that Uliana has given him a hug and a kiss when they meet in Russia. He thinks she’s a very tender, caring person. After one date, she is very interested in James. She thinks he has great good looks. He thinks she is very sweet and thinks it could be the beginning of a love story. He wants to see her the next day and investigate further. He thinks it is odd that he is developing feelings for her when they tour a Russian military bone yard.

Gary is engaged to Olga after a two years correspondence. Finally he is to see her after their first meeting a year and a half ago. He has waited at the airport for Olga for two hours, but no Olga appears. He is worried and getting anxious that his worst fears are coming true. He has sent her thousands of dollars for the trip, so he has to put the fear of being scammed out of his mind. 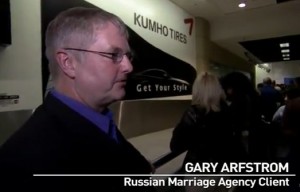 The international marriage agency they are working with has thousands of Russian women who want to marry American men. Gary, who has a teaching job, has chosen Olga, and finally she does arrive from Customs. She was delayed with multiple immigration screenings.

When she arrives, toting her luggage, Gary greets her with the Russian word for “welcome.” He speaks to her in English with a Russian accent so that she might understand him better. He takes her back to his hotel in Las Vegas, where he lives and which is now Olga’s new home. He shows her his apartment, which she likes. “Very like,” she says. Olga gives him a bottle of Cognac, which pleases him no end.