Today, we’re going to talk about a video on YouTube called #1 Ukraine online dating scam caught on tape: see how they dupe you out of millions every year. We’ll talk about what happens and what they are trying to get you, the viewer, to understand.

This video has everything to do with online Russian and Ukrainian dating sites. If you don’t know what this is, it’s a website where women from Russia and Ukraine register and creat an account on there and you can find one you like and talk to them. Be aware, though, you do have to pay money.

As the video starts, it talks about bringing to light the dirty secrets of the Russian and Ukrainian online dating industry. The next thing that is talked about is a investigative journalism documentary called Love Me or Love Me Not? that interviews not only the victims but also the scammers. This video is one of the banned episodes. 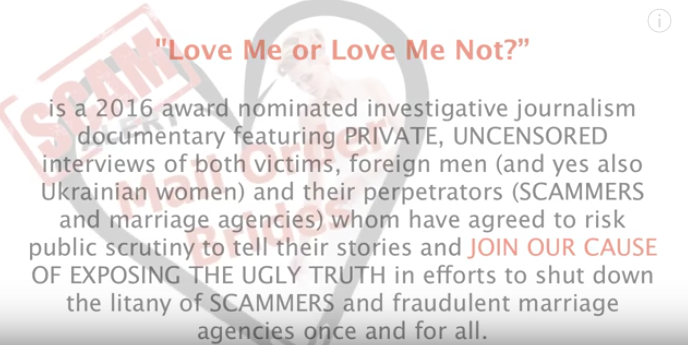 The woman they interview, Natasha, is a translator for the industry. Her job is to translate and pretend to be the Ukrainian and Russian brides who were posted on these sites. They talk about how you think you’re talking to the women but you’re actually usually talking to the translator. Natasha goes on to talk about how she does messaging and live chatting with the men who were interested.

Natasha talked about there being 2 ways to chat with the women. If it was only live chat with no video, then you are usually talking to the translator. On the other hand, if you are actually doing a video chat then you are usually talking to the model. With that being said, a lot of these women aren’t interested in the man. They just see this as a job and a money maker.

Another thing she talked about is how the agencies train the translators to say what the men want to hear so they will make more money. She talked about the first message to the man being free and how it’s usually a generic response in order to get the man to reply. The way the translators get paid is by the men buying credits and they have to give credits to talk with them. They give up a certain amount of credits per letter and the more letters they write back and forth then the more money they can make.

Natasha talks about the companies knowing that only the translators are talking to these men and how they try everything to keep that fact covered up. They also purposely put very attractive and young women on there because they know the men will spend a lot of money talking to them.

From what Natasha said, there are very strict guidelines that a woman has to meet to be able to even get featured on the site and be in the database. For example, they aren’t allowed to be able to be on any other dating sites and if they have been talking to a man and refuse to meet him then they have to pay a penalty to the agency. When it comes to meetings, the translators usually try to stop them from happening because if it does happen then there is likely to be some kind of conflict. These small agencies usually have very small databases and only a few translators.

In conclusion, the main message of the video is that more than likely you aren’t, or ever will, talk to the actual girl. You are actually probably talking to a translator and you have a slim to none chance of ever even meeting the person. You spend all this money to end up getting screwed in the long run.

#1 Ukraine online dating scam caught on tape: see how they dupe you out of millions every year

Learn more about how to date and marry a Ukrainian woman in the following ebooks: