CNN International – a segment recently aired with reporter Jim Boulden who traveled to Kiev, Ukraine to report on marriages between Ukrainian woman and foreigners specifically those marrying through marriage brokers. Boulden and his camera crew traveled to Kiev to cover the story and met with Agnessa Khalishnakova who runs the “7th Heaven” marriage brokerage.

The business office was located on the 15th floor of an apartment high-rise built in the Soviet-era. Admittedly, the building was one in need of renovation. Khalishnakova herself was friendly and fair to look upon but it was noted she is “not looking for a husband” but helps “young women around her age” find husbands.

The women who go to the marriage brokerages usually hail from cities and towns of Ukraine that lack the sophistication and development of more urban cities; they were referred to in the program segment as “provincial” cities. The women themselves are not charged any fee for their enrollment with the marriage brokerage – only the foreign men. The women are provided profiles featuring photographs and videos of themselves.

As to why the women want foreign husbands, Khalishnakova said it’s the opinion of the women that Ukrainian men are “not so serious” and that the young women are looking to marry older men.

The segment featured a young blond by the name of Gallina who is looking for her soul mate regardless of which part of the world he comes from. Gallina was quite focused on the fact that her desire is to find true love. A fact that was underscored by Khalishnakova who stated that she offers guidance to her clients encouraging their relationships when she can discern the sincerity of the relationship by the look in the girl’s eyes or admonishing the girl to slow things down if she feels the relationship is moving too fast. Neither Gallina nor Khalishnakova mentioned the wealth of the man as a factor for the marriage.

As per the Ukrainian government, all marriages involving foreigners must take place in the wedding registry and the opening segment featured just such a couple albeit that specific couple were not paired together through a marriage broker. 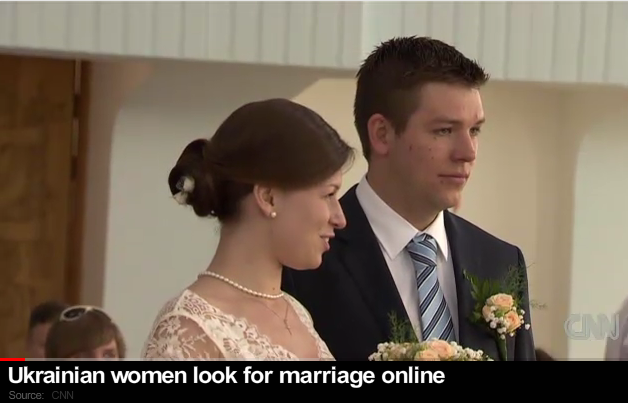