It seems there are more than a few men and women who are frustrated with the dating processes all around the globe. The complaints tend to run on both sides of the aisle, and today the ever present need for change and a greater pool of dating partners has gone high tech and international. 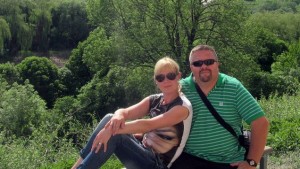 Frustrated with dating local women in the Salt Lake area, Nathan Adams, a 45-year-old aircraft mechanic decided to expand his horizons. He decided to not only look out of the Salt Lake City area and out of his state for a potential bride, Nathan opted to look overseas. Since five of his co-workers are married to women from other countries, he took their advice and decided to seek out international dating websites to see if he could find his “dream wife”. He admits the process took a little bit of time, but it seems it was well worth the effort for him.

He was a little unsure of how to proceed, but once Nathan decided to explore this option, he went out and invested in a home computer, and began his search. The first website he explored proved to be what he felt was a scam. It was based in Asia and he felt that it wasn’t legitimate and was possibly run by a model who had other models working to get money through false dating. However, this experience did not deter Nathan from finding a special person to share his life with.

His significant drive to find a wife was in part due to a deeper need not all his own. Nathan was a single father of a 6 year old little girl named Vanessa who needed a Mom. He had divorced Vanessa’s mother a few year’s before and she had recently past away, thus leaving little Vanessa with no mother to influence her world growing up. Determined to find a wife and mother for his daughter, Nathan finally found AnastasiaDate.com

It was here he began to realize his dream of finding a wife. AnastasiaDate.com is a web based dating service geared towards matching American men with women from former Soviet Union countries. The website is the largest international dating website of its kind in the world. While certainly smaller than other well know popular general dating sites like Match.com and eHarmony.com, AnastasiaDate.com provides a unique opportunity for Western men to find more traditional wives from a pool of women from former Soviet countries who are looking for hard working men from Western countries to marry and share their life with.

It was through the resources of the women seeking husbands at AnastasiaDate.com that Nathan says he found his “dream wife”. Elena Adamchiyk is from the Ukraine a former Soviet Block country. Elena, 34, has been married twice before to Russian men who cheated on her and drank excessively. After her last divorce, Elena decided she’d had enough with “Russian men” and wanted to expand her horizons to another part of the world. That is when she joined Anastasia.com to find her “perfect match”. According to Elena, in Russia it is not uncommon for men to drink excessively, be disrespectful or cheat on their spouses. After her failed second marriage, she decided she did not want a “Russian marriage”, but wanted a man who would treat her better, a man she could love, care for and share a wonderful life experience with.

AnastasiaDate.com, is different than other dating websites in how they charge their customers. By contrast to typical dating websites, AnastasiaDate.com’s fees come from charging men in Western countries such as the U.S. to exchange and translate electronic letters and set up communications with potential partners. In addition, AnastasiaDate.com charges to arrange live text and video chats with women in Russia,the Ukraine, Moldova and other former Soviet Block countries to get to know them better.

Once Nathan began communicating with Elena, the two exchanged many letters, and began Skyping as a means to better see and understand each other. After several trips back and forth and a year of communicating through love letters, online chats and Skype, Nathan and Elena have fallen in love and decided to get married. Elena has come to America on a 90 day fiance’ Visa that will help the two prepare for their nuptials and help them to begin to embark on their lifetime journey together.

As with any dating website, there are no guarantees that the perfect spouse will be found, but there is nothing but the highest of praise coming out of Utah for AnastasiaDate.com. In fact, Nathan and Elena have become the perfect Poster Couple for the international dating website of AnastasiaDate.com. Their success story has become an inspiration for others seeking to find true love online.