VeronikaLove.com User Review: A lot of scammers & some genuine women

I too would like to warn those men who become captivated by these absolutely beautiful young ladies. I have writing more than 6 to 7 ladies over the past 3 yrs primarily because I have been interested in learning Russian and joined the site initially to learn the language through pen pals.

I unintentionally in the process became taken by no fewer than 4 absolutely stunning young women. Two of them I corresponded with over one year time period writing 50 to 60 letters to each and one about 30 letters over 6-8 months.  I actually being so serious in learning the language made three trips to the Ukraine to study Russian at local universities in the capital city of Kyiv (Kiev) for one month at a time each of three years.

In EACH case when I suggested that we meet immediately excuses why they could not materialized. Some were quite lame including “my sister of 27 yrs old has a cancer and is on her death bed and I have to take care of her 24/7 and could not possibly go out to dinner with you (I suggested I cater dinner into the home and we eat at her death bed to which suddenly she could not write letters any longer!).

Another suggested she could not because she might be sick with the flu and did not want to get me sick though this particular discussion was 2 months prior to the proposed meeting time! Another I caught in lies such as reminding them they told me they were an only child and suddenly 30 to 40 letters later a sister materialized clearly indicating some of the social history was all concocted.

Another case after writing for 5 months and summer came along clearly another writer began sending letters in her name and profile.  The original writer always wrote in Russian and now I was getting English letters that were very poorly written and clearly the style was different.  I suspected the original lady was on vacation and out of town so likely some other author took over. They clearly did not read what we had discussed in the prior 4-5 months and were asking questions we had already gone over.

It was so obvious that it was not the same Anna.  The most recent one after one year of writing and who suggested I was someone special that she told her family about and who implied we were exclusive I found out from the internet from another male gentleman whom I did not know but found out I was writing this particular lady mentioned he had a writing relationship and even went to her home town in the Ukraine.

He discovered that she was registered on 6 of these dating sites.  He learned the girls sign up and then get a kick back depending upon the number of letters the men write back or videos they open. What was amazing about this particular young lady, who I have to admit was absolutely gorgeous, had a younger sister.  She wrote me that her sister had just met a nice man from a foreign country and they got married on the spur of the moment in the Ukraine. Her sister was now waiting for papers to join her “new husband” and she reported to me it would take a year to get this special visa in order to leave the country and enter her new home. It turns out the sister now supposedly married was registered on this same website (Veronikalove.com). 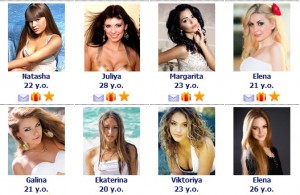 Unbelievably after one year of writing this young lady her sister whom she stated she told her about me writes me after her so called wedding and sends me one of the standard flirtatious, sexually provocative letters trying to get me to open her letters. When I confronted the sister whom I had been corresponding all year and asked what her sister was doing now that she was married and did she not know who I was she basically became very defensive, angry , and in so many words wrote I had no right to judge these  young ladies.

To top this off I received a “new” letter from this young lady I had been corresponding through Veronikalove but from another site on which she was registered sent to me not realizing it was me with whom she was corresponding with for the past 60-70 letters!

Clearly the agency at this other website (Single Baltic Lady) allows mass mailing of form letters to unsuspecting men just on opening their profile and photos even without writing them!  I confronted her on this and clearly she ignored the letter. What could she say as she was caught red handed in an elaborate letter writing scheme.

Unfortunately the young ladies and especially the older ladies and perhaps the younger ones who maybe are not as blessed with the striking looks of some of the girls who are genuinely interested in meeting foreign men are looked upon as potential scammers as well. I did meet a very genuine lady in her 40s , who is just as beautiful and will be meeting her this summer. . . I hope.

We will see if that relationship is real though she seems very different than the young ladies I had been involved with previously.  Oh, well, I did learn a lot practical Russian vocabulary in the process which was my primary goal.

Fellow men, be forewarned.  Look to see if the ladies are on other sites and ask if they are writing other men in the process. Do an identity scan by copying a profile photo and running a cross check of that photo and see if it is on the internet.

Offering to meet in a specific city on a certain weekend will weed out the scammers quickly. Beware considering all the problems in that poor country now maybe one of the ladies was correct in that we do not have a right to judge them as they are just trying to survive and make a comfortable living.