Video: the distressed Western men looking for brides in Ukraine

The collapse of the Soviet Union has resulted in a mixed bag for the former inhabitants of the former Soviet Empire. One result of the collapse was that the individual countries that comprised the Soviet Union have asserted their independence and autonomy from Russia. Ukraine is currently locked in a tug of war struggle between the Russia and Western Europe.

The majority of the population is in favor of tying the future of Ukraine to Western Europe rather than Russia. They regard Europe as a more fertile ground for their political and economic hopes and aspirations. Ukraine has struggled has never been able to gain a strong economic foothold since the collapse of the Soviet Union, and the present crisis is threatening the make things much worse.

The economic prospects for the future of the country are very poor, alcoholism is rampant, and younger people are looking for alternative solutions. One of the ironies of the current situation in the Ukraine is that the marriage business is thriving. This is the point of departure for a contemporary Youtube documentary titled “The Desperate Western Men Hunting Wives in the Ukraine.”

The film is an interesting expose that explores the marriage industry that is thriving in the Ukraine. It tells the story by focusing on the American men who are seeking wives, and on the young Ukrainian women who are seeking husbands. One of the things that the film makes clear is that the there is a gulf between the two. 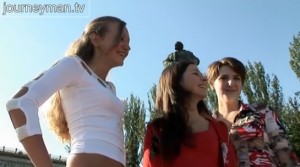 From the Ukrainian perspective, there are not simply enough men to go around. Ukrainian women outnumber the men 5 to 4. Alcoholism is becoming an increasing problem as economic opportunities decline. Several of the young women interviewed in the film complain that young Ukrainian men are more interesting in drinking rather than marrying and having a family.

The film, however, also suggests that many Ukrainian women consider marriage to an American as a way to a better economic future. However, this is not the whole story. Julia is a young 24-year old Ukrainian women interviewed in the film. She is a divorced single parent who sincerely hopes to find true love and a father for her daughter. She comes across as engaging, charming, and flattered by the attention she receives. She, in fact, captivates the attention of two of the men in the film.

The American men, on the other hand, come across “desperate,” at on level, and outright creepy at another level. The men interested in finding a mate speak in less than flattering terms about the process. More than one of the men use militaristic terms to talk about the process. They use phrases such as “a search and destroy mission,” “execute a plan,” and “rallying around the troops.” They also use sports analogies like “being in the game,” and “being in the zone.” The title of the film is telling, the “desperate” men are lonely American men who desperately want to find a wife. They have given up on American women, and watching them makes one think that most American women have probably given up on them as well.

The film follows a group of men as they search for a wife in the Ukraine. The basic steps involve viewing photos and personal details of different Ukrainian women presented in a folder, setting up a date via email, attending meet and greet social dances and events. The process is brokered and controlled by a wedding agency and Russian tour representative.

Another woman complains that the men are not interested in the fact that “we are intelligent and independent women. She says they only ask us “How old are you?” and “Do you work?” One of the men, who is 65, says that finding a Ukrainian wife is “like purchasing a used Cadillac.” He puts a strong emphasis on “used,” by which he means their loss of virginity. He then says that he would never but a used car without taking it for a ride.

Anyone who watches “The Desperate Western Men Hunting Wives in the Ukraine” cannot help feeling sympathy for the young women in the film. It is hard not to feel a little empathy for some of the men, but several of the men come across as perverse and dangerous.

Video: The Desperate Western Men Hunting For Wives in the Ukraine