“Sex in the City – Ukraine’s Sex Tourism Boom” is an episode of Dateline on SBS. The episode is largely focused on the effects of foreigners traveling to Ukraine to partake in the sex industry. The episode highlights some of the major problems that the uptick in sex tourism is causing within the country as well as some of the reasons why it is happening and the consequences for the people of Ukraine.

One of these problems includes greatly increasing the spread of sexually transmitted diseases such as HIV and Syphilis. Another problem is human trafficking of Ukrainian women and women from nearby countries as well trafficking of children for sex and the creation of child pornography. In this description we will go over the main points brought up by SBS Dateline.

In just the city of Kiev in the Ukraine there are anywhere from 20,000 to 60,000 prostitutes. Some are part time and some are full time but all participate in a thriving sex tourism trade. With wages very low in most normal jobs many women are drawn by the promise of making many times their average wages by working as a prostitute and foreign tourists are making sure that they are never short of work. 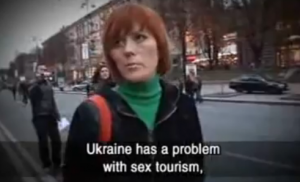 Ukraine is the second largest nation in Europe but it is also one of the poorest. The economic conditions lead to a great deal of hardship for the people of Ukraine which leads women into the sex trade. Many other individuals and businesses benefit from the sex trade including hotels where the tourists stay, restaurants where the foreigners eat and pretty much anywhere they spend money. There is an entire cottage industry built around the sex tourism with even high end hotels getting in on the action.

Child prostitution is also a major issue in the areas where sex tourism is prevalent. Since many of the same business interests that benefit from the sex tourism are profiting from the child prostitution many authorities like the police and army turn a blind eye to the child sex trade. Many authority figures from the policeman on the beat up to some high level politicians may profit directly or indirectly from the sex trade.

Since little is being done by the government a group of Ukrainian feminists known as FEMEN is working towards ending the trade through protests and campaigns to raise social awareness of the issue and to hopefully get something done about it. These women use a number of novel ways to raise awareness including showing off their own bodies and looks to get attention from men about the plight of sex workers in Ukraine and the corrosive effect that sex tourism is having in their community. They also stage elaborate theatrical performances in the streets and other venues. Another tactic they have begun to use is directly accosting foreign male tourists they assume are in the country for sex tourism.

The report then goes on to explain that in addition to sex tourism the creation and distribution of child pornography throughout Ukraine has become a major problem with as much as 40 percent of the child pornography produced worldwide comes from Ukraine. T

here are also many problems with the trafficking of Ukrainian women into foreign countries through the internet. While some at the very top make a great deal of money from the sex trade the society at large suffers a great deal. A great deal of poverty, drug abuse and disease is spread by the sex tourism industry and many of the women and children working in it are forced to do so.