What do Ukrainian ladies think about a relationship with a Western man?

The Ukrainian news channel “Visti” this video broadcasted on the 9th October in Kharkov, Ukraine. The news channel made a short but very interesting story about what Ukrainian ladies think about “marrying a foreigner” topic; thus Marina Demyanova and Dmytro Chobatiryov, the journalists of the Ukrainian news channel “Visti”, asked first a few accidental girls on the streets of Kharkov and then they came to the Mordinson agency office to ask the manager Michael a few questions.

The most important question “Visti” had was about the enthusiasm of the single Ukrainian ladies from Kharkov who join the Mordinson marriage agency. Michael told Marina and Dmytro that for most of the Ukrainian ladies for marriage the purpose is starting a happy and healthy relationship that will last all their lives and that’s what attracts Western men to Ukrainian dating and matchmaking services like the Mordinson agency. Michael also said it’s a well known fact that some of the most beautiful women in the world live in Ukraine and this is another factor which also attracts Western men.

This video has English subtitles, so the Ukrainian dating stories readers who don’t speak Ukrainian or Russian will still be able to understand the content!

Video “What do Ukrainian ladies think about a relationship with a Western man?”

It’s been a long time since the state borders ceased to pose an obstacle in the pursuit of happy family life for the Ukrainian women “Visti” asked Kharkov women if they would be interested in a man from abroad? 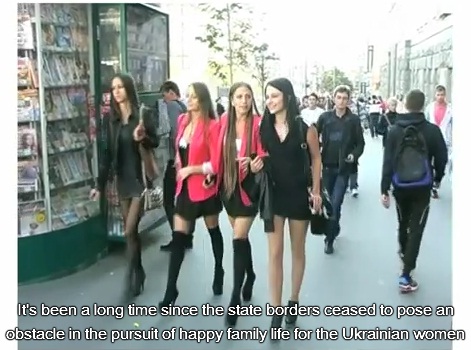 “Do you have a candidate?”

There are candidates and quite a few. A way to find them for ladies is the marriage agency Mordinson. The agency works with men from Western Europe, Canada, Australia and USA. For the Ukrainian women the safety is provided, a man can only get a woman’s contact details after a personal meeting in Kharkov. Also a man must provide a list of documents which include the criminal record document and proof of a stable financial state. However as the 13 years experience of the agency shows- money isn’t the priority for the Ukrainian women. Ukrainian women are not interested in relationship that will last for a year or two.

Most of the women in Ukraine are interested in relationship that will last all their life. Women in Ukraine are educated, intelligent and at the same time emotional, open, warm hearted. It’s been said so many times that Ukrainian women are the most beautiful in the world; I believe it also plays its role. The women do not pay anything for the services of the agency; the only thing that is required is the desire to get married.