I have been on AnastasiaDate.com since November. I have spent over $2000 on chats, most of them pretty meaningless and not leading to anything. In summary, I would say this:

1. On AnastasiaDate (being honest or a scam), the actual information a male can put in a profile is very limited. It would be much nicer and helpful if the profile on both the male and female side would be more comprehensive. So if AD was really serios about match-making, they would allow both of men and women to describe themselves better.

2. AnastasiaDate does send out automated letters and automated (“fake”) chat requests. One day I had seven letters within a matter of minutes, although my profile was empty. I also get chat requests that say how much they enjoyed my profile, although there I appear 112 years old without any info in the fields.

This is totally counter-productive and a huge disservice to the serious ladies there. There is also no way of disabling the chat requests. You get invites from ladies who don’t match your search criteria at all, which is a total waste.

3. AnastasiaDate is expensive. Sure, their translation service is appreciated, but you never know what of your letter actually arrives in a translated form on the other side – and vice versa. Chatting is expensive and can be very aggravating when there are delays in the reply, as the clock just keeps ticking.

Paying 10 credits (between $3-$7.5) for photos attached to your letter is also not exactly cheap. So, don’t go there if money is an issue. Although I do have the money, I always felt pressurised when chatting to ladies, hence my efforts to continue off-site.

4. The ultimate test if a woman is real and really interested in you is in how she responds to you asking her to take the communication off-site to Facebook, Skype or email. If she doesn’t, and language is not an issue, then you know she’s not really into you, otherwise she would make an effort.

I had contact with about 50 of them, of which I have 3 on Facebook, of which 2 are too young and one doesn’t speak English very well. That alone speaks volumes. (I ‘gave’ all of them my name and told them that I am an open book on the Internet – just google my name and you will see. So they could see what I do and what I am about, before getting in touch.)

5. Many ladies are afraid to give out their personal details, because they think it’s not allowed. I checked with AnastasiaDate, and they said that it’s ok to exchange details. Their website only says that they are not allowed to share contact details in the profile, which obviously makes sense.

6. The chat is censored. Words like google or Facebook get ……….. out, which is also hindering communication. Obviously AD wants to keep men on site and chatting, but once again, this is neither fair nor conducive.

7. Women who engage on AnastasiaDate should be properly informed that the site’s language is English, and that their chances of finding the right man are pretty much NIL if they don’t speak at least some English. 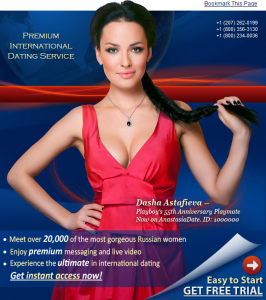 They should also be informed about Western culture and about the cost the man incurs when on the site, because they – at least – said – to me – that they don’t know that the man pays.

8. There is info on the Net, where you can see that they recruit women to chat with me. So it’s less about love and more about money. After all, all those professional studio and nature shots with expensive clothes need to be paid for.

I know a girl who now has 11 videos online, is up late all night at the agency office and gets upset when I tell her that she’s after the money. 18 years old! She should sleep at night, not chat to men whose language she doesn’t even speak.

So that’s just a bit of feedback from me.

Questions to this review?
Feel free to ask Krystyna, your Ukrainian dating expert