A Ukrainian wife leads to a successful matchmaking business

Being an inspiration to tons of Asian men, Mei Aisi has taken his success to help other amazing Chinese and other Far Eastern men who are considered to be less attractive or successful.

Mei Aisi, who once upon a time was considered ‘ugly and academically unsuccessful’, became an Internet sensation when he posted pictures of his beautiful, Ukrainian wife. Everyone deserves to find love and happiness, and for someone who is in the same boat as other wonderful Chinese men who will normally be overlooked by pretty women wonder what his secret is.

Mei Aisi, 35, has been enjoying the fruits of his labor alongside his beautiful wife, Daria Mei, and their precious and beautiful baby, Alice. What a beautiful picture sent online of this family enjoying the holiday! Mei lets his fellow, Chinese brothers know that they can have the same.

He has started a business for available Asian men to meet up with available women from Europe in a speed-dating club called Ulove. More specifically, Ulove is located in Ukraine’s second largest city, Kharkiv, and it connects exceptional Chinese men with talented Ukrainian women, according to Mei.

Mei stated how many don’t believe that a guy as ugly as he is (his words) could find a wife as pretty as his. And thus, he gives other Asian men advice about love at his dating club and dating agency.

Furthermore, his female members’ age group ranges from 17 years old to early/mid-20s. According to Mr. Mei, women of Ukraine normally marry early before the age of 23, so that’s why the female members are young. Also, many of these women are university students. 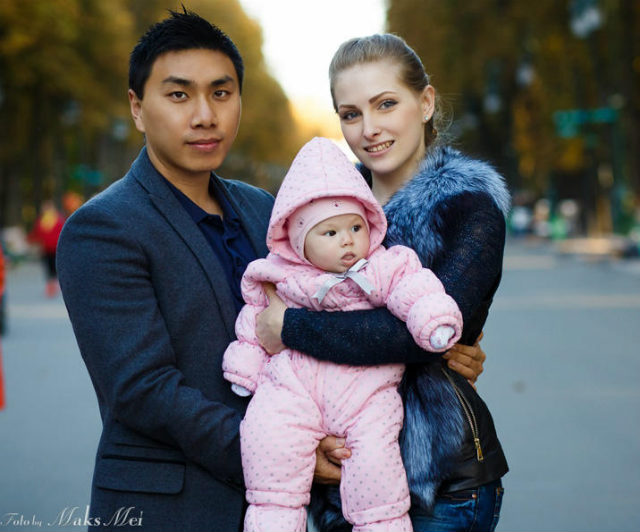 17 years ago, Mei’s world looked bleak. He was rejected from receiving a highly institutionalized education due to failing a university entrance examination in China. So, he moved to Ukraine to begin a new life in 2001. With all these odds set against him, no one would ever think he would’ve gained the success he has today in his personal and professional life.

Ulove dating club was launched after so many men in China asked Mei how they can find a wife as beautiful as his. Before launching Ulove, Mei already owned two businesses, a bronze factory and a trading company in Ukraine. Nevertheless, Ulove offers membership to Asian men and European women in which consists of over 300 Ukrainian women and approximately 75 males.

The women are really young, they are dressed in evening gowns, and they look glamorous with their hair and makeup when they meet with potential suitors at events the Ulove club holds.

This establishment began in 2016, and there is some significant progress already with around five engagements and dozens of serious relationships created due to Ulove. This is proof alone that his organization works, and it denounces the preposterous idea that this organization is just a fancy, upscale prostitution ring or the sort. And for more proof, the following includes testimonials from various results and current/previous clients of Ulove:

Ulove used the most popular social media app from Ulove called Weibo where the females use signboards along with Chinese characters for advertising to available bachelors.

Some romantic messages include learning to speak Chinese hard to treat the potential suitor ears with sweet words, and wondering would the potential suitor love to have a cute Eurasian baby, for instance the women are learning more about Chinese culture. One woman said she loves the obedience of Chinese people.

There are also pictures, which speaks more than words, of members of both sexes dancing and having a good time at the Ulove club during some dating events, such as the one held at luxurious Kharkiv golf club.

Mr. Mei has started a business for eligible Chinese bachelors to meet up with young, beautiful, and talented Ukrainian women in a speed-dating club called Ulove. Based in Kharkiv, Mei works hard to so that everyone has a chance of happiness and love.

With being in business for just over a year, Ulove is already making great progress in couples finding serious mates and engagements. And furthermore, Mr. Mei is expecting to expand his organization to neighboring countries, such as Russia and Belarus.